Located at the foot of the old ramparts, it was at the end of the 18th century that this old ditch of the city gave way to this walk, long known as Place des Cordeliers. It takes the name of St. Helena in 1844 in honor of General Bertrand who had accompanied on this island the Emperor Napoleon in exile. The bronze statue made by the sculptor François Rude (1784-1855) was inaugurated in 1854 and represents Bertrand in Grand Marshal’s costume at the Palace when he arrived in France after the death of the Emperor.

With one hand he holds an unwound sheet on which one reads: “This is my testament: signed Napoleon”, on the other he presents the sword of Austerlitz on a drapery dotted with bees and wearing a crowned “N” . This representation symbolizes Bertrand’s fidelity to Napoleon.

The collections of the Bertrand museum-museum a few steps from here have many memories of St. Helena. On the benches of the square appear the symbols of the general such as laurels, initials and eagle heads. At the end of the square there is a lovely view of the chevet of the Cordeliers church and terraced gardens. 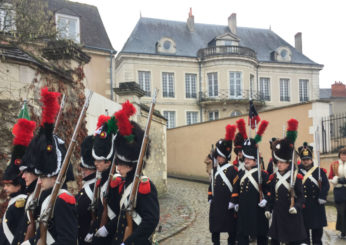